There are a lot of time travel books centred around a leap into the distant past. However, for me, the 1980s will always hold a particular fascination. I grew-up in suburban England and hit my teenage years in 1984. It was a time when I first became aware of popular music, of fashion, and…girls. Actually, my first teenage love wasn’t a girl but a Commodore 64 computer. 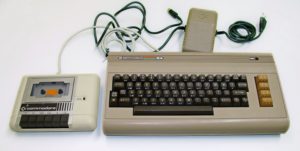 It was my love of all things ’80s that provided the inspiration for my first novel – The ’86 Fix. I’ve read plenty of time travel books and enjoyed most of them. However, they all focused on a period of time before I ever drew breath on this planet. As fascinating as Tudor times may have been, I yearned for some nostalgia. I wanted a good story that centred on the things I remembered from my youth.

In March 2016, and after years of threatening to write a book, I decided to take some advice I’d read somewhere, and to write the book I wanted to read. Seven months later, and after a lot of hard work, The ’86 Fix was published on Amazon.

The book is about Craig Pelling – a middle-aged nobody living in Suburban England, married to a wife he doesn’t love and working as the manager of an electrical store – a job he never wanted. Craig was born in 1970 and like me, grew-up through the 1980s. Also like me, his first computer was a Commodore 64. It is Craig’s computer that changes his mundane life when he unearths it in his former childhood bedroom at his parents house.

If you want to read the book, it’s available on Kindle from Amazon.

I won’t go into too much detail about the plot because I hate spoilers. What I would say is that The ’86 Fix isn’t your typical time travel book. I wanted to write a book that would appeal to people who didn’t usually read sci-fi. Some of my initial reviewers were most certainly not sci-fi fans and they enjoyed it immensely (maybe they were being polite but I was happy to take the plaundits).

I set-out to write a book with a sense of humour. But I also wanted to add a touch of poignancy. Obviously none of us will ever get to travel back in time, let alone to our own childhood, but what I wanted to capture was the feeling of nostalgia. Whether it was chewing on a Texan Bar or playing Space Invaders in an amusement arcade – time travel for me is more interesting if you’re re-visiting a bygone era you’ve actually lived through.

Anyway, enough of my ramblings. If you’re looking for a time travel book that is based in the 1980s and has a very British flavour, give The ’86 Fix a go – I’m sure you’ll like it, maybe even love it.

Everything that is wrong with Craig Pelling’s life can be traced back to 1986 and the moment he popped-in to a newsagents to buy a can of Coke. Now he lives in a loveless marriage and earns a living in a dead-end job as the manager of an electrical store. He could have been so much more, achieved so much more.

But as bitter as Craig currently feels about his mundane life, things are about to get a lot worse. Just as everything starts to crumble around him, Craig is thrown a lifeline. The miraculous lifeline of a brief trip back to 1986. But will he be able to fix his life? Is it as simple as just reverting one decision he made over thirty years ago? Craig is about to find out.