This page was a bugger to write so forgive me as I attempt to sound interesting without coming across as a total narcissist. If you’re not put off, click on the tabs below to discover who I am, and how I got here.

On Friday 18th December 2015, I met up with a few friends for Christmas drinks. We got onto the subject of New Year resolutions and I, buoyed by alcohol, declared I intended to write a book. A wager was placed but at some point during the evening the resolution was lost in an alcoholic haze.

In March 2016, one of my friends casually reminded me of our bet so with some trepidation, I typed the first page of a novel I had no idea how to write.

Fast forward six months and by mid-September, I had somehow cobbled together enough pages for a novel. More in hope than expectation, I then emailed the manuscript to a handful of literary agents. Weeks passed and my emails remained unanswered so I decided to publish the book myself. On October 15th 2016, The ’86 Fix joined millions of other novels on Amazon’s virtual shelves.

A tick on a bucket list and a bet won, I got on with my life. I had no idea my little novel would go on to become a bestseller. I should stress the only reason it became a bestseller is because so many wonderful people took a punt, bought it, and posted lovely reviews. Without their support, I wouldn’t be writing this guff.

Remarkably, and I still can’t work out how, I’ve sold almost 500,000 books and now earn a living as a full-time author. I’ve also received a number of offers from publishers but the timing has never been right. Alas, the tentative enquiries about TV/film rights to a couple of my novels haven’t amounted to anything, so those rights are still up for grabs (if you’re a producer, that was a less-than-subtle hint – contact me).

Shortly after I came into the world, my family moved into a terraced house on a sprawling council estate in South-West Surrey. My youngest brother arrived two years later and by the end of 1974, there were six of us living in that house: my parents, and us four boys.

My dad was employed as a porter for a removals company and Mum worked in a local café. It’s no exaggeration to say we were piss-poor. To be fair, I didn’t realise how poor we were until I reflected on my childhood in later years. My kids don’t believe me but I remember we’d frequently go clothes shopping at jumble sales on a Saturday, and I lost count how many times I went to school with a cheese sandwich and a solitary digestive biscuit in my lunchbox.

It would be easy to assume my childhood was, well, a bit shit, but it honestly wasn’t. Love doesn’t cost a bean and there was plenty of it in our home. 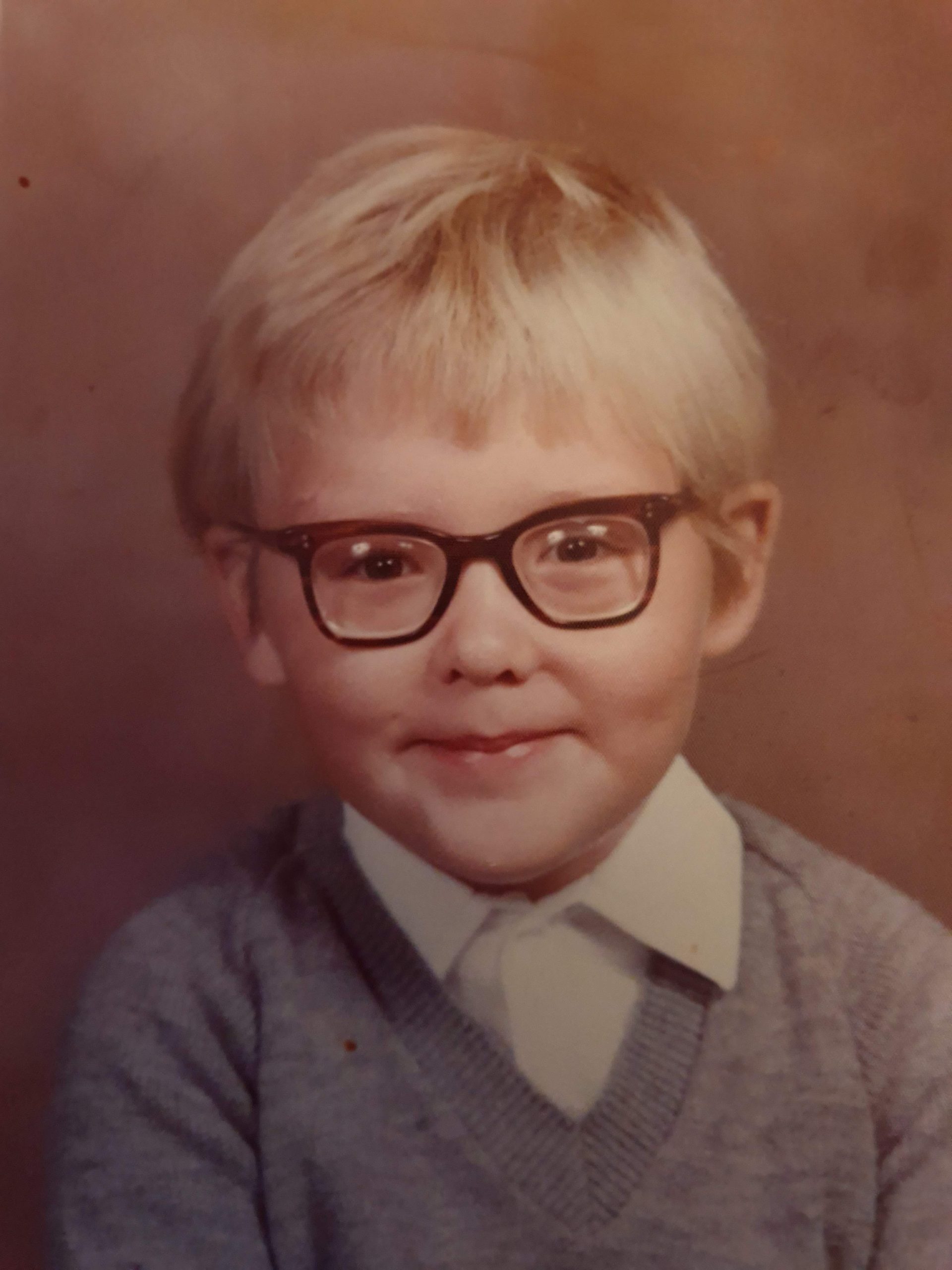 By the time I hit my teenage years, both my older brothers were working and life did improve as they contributed to the household finances. We were still poor, just not piss-poor. Thanks to a man from The Provident (a doorstep loan company), Christmas presents in the 1980s included an Oric Atmos home computer and a BMX from Woolworths. In later years, Mum told me she paid five quid a week, every week of the year in order to buy our Christmas presents. I might have shed a tear at that moment.

I left school in 1988 with a smattering of GCSEs but college wasn’t an option. There was no way my parents could afford to support me through two more years of education. As for any aspirations of attending university, my dad said it wasn’t for “folks like us”. Further education a non-starter, I got a job.

I won’t bore you with my career history but in 2004, I quit my job as a director of a property company so I could spend more time with my young family. Miles was born in 1998 and Grace came along in 2002. For a couple of years, I did all sorts to pay the bills but I eventually became a freelance marketing consultant; helping small businesses with online marketing. I sold that business in October 2019 to focus on my writing career.

Whenever I read interviews with authors, they nearly always cite their inspiration. It’s usually either one of the literary greats such as Hemmingway or Woolf, or a contemporary author who has achieved great success. I have a confession to make — neither of my inspirations comes from the world of literary fiction.

“And Trevor Francis tracksuits from a mush in Shepherd’s Bush.”

Sorry, Shakespeare but for me, the above line is one of the greatest ever penned. That probably says a lot about my literary tastes.

I doubt I need to convince anyone just how brilliant a writer John Sullivan was — particularly with ‘Only Fools and Horses’— but I should try to convince you how much he inspired me. In fact, I adopt what I call the Only Fools Formula in my writing. The theory is simple enough but I’m a mere amateur at the practice. For perfection, you need to look towards John Sullivan.

The Only Fools formula is thus…

MEMORABLE CHARACTERS: Who doesn’t love Del Boy, or Rodney, Uncle Albert, Raquel, Trigger … I could go on. Sullivan made his characters not only memorable but relatable — I think we’ve all met a Del Boy and I’ve certainly worked with a few Rodneys over the years, for sure. There were no bit-part characters; they all mattered.

COMPELLING STORYLINES: Many sitcoms suffer from a paper-thin storyline but Sullivan ensured every episode of ‘Only Fools and Horses’ followed an established story arc — proper stories with cleverly constructed twists and turns. The 1996 Christmas special, ‘Time on Our Hands’ is a masterpiece in storytelling. If you don’t recall the episode, it’s the one where Del and Rodney finally became millionaires.

POIGNANCY: I think this is the special sauce in Sullivan’s writing. He gave us characters we loved and every now and then, he’d put those characters in a situation which would break our hearts. Remember when Cassandra suffered a miscarriage, or when Del cried after being told he wasn’t suffering some dreadful illness? Sullivan knew that to appreciate the light, you sometimes need a little darkness.

HUMOUR: I know I’m stating the obvious here; a situation comedy should be funny. However, few sit-coms reach the level of ‘Only Fools and Horses’ for genuine laugh-out-loud moments. Of course, many recall the physical comedy such as the iconic scene where Del Boy leans on a bar which is no longer there but for me, some of Sullivan’s best work involved dialogue. I think the conversation about Trigger’s new broom is comedy genius but if you don’t believe me, watch it here.

I think I first read ‘Notes from a Small Island’ twenty years ago. I suppose you could say it’s a travel book — the observations of a young American as he explores The British Isles for the first time. However, it wasn’t like any travel book I’d ever read because Bryson injected his own unique style.

If you’ve never read ‘Notes from a Small Island’ or any of Bryson’s other travel books, I can’t recommend them enough. Even if you have no interest in travel, there’s so much more to enjoy: the dry wit, the genuinely laugh-out-loud anecdotes, and the liberal use of industrial language. Bryson possesses that rare skill where he can make even the most mundane of subjects interesting.

The reason I find Bryson’s books so inspirational is because he didn’t conform to type. Look in any literary genre and you’ll find thousands upon thousands of similar books; all sticking to a tried-and-trusted formula. Bryson dared to be different and for readers like me, he made (and continues to make) non-fiction books unputdownable.